The first shot from the first Columbia cartoon release, RATSKIN (1929) 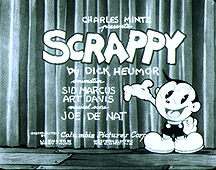 Columbia Pictures slowly took over the Charles Mintz Studio (Scrappy and Krazy Kat) by folding it into the Screen Gems Studio in 1934. This studio continued producing cartoons for Columbia release until it closed in 1946. (It's last cartoon releases appeared in 1949 - For the record: the Screen Gems name was reactivated in 1948 for Columbia's TV production, and today is a label for Sony's small budget theatrical feature films). Columbia began producing and releasing UPA cartoons in 1948. 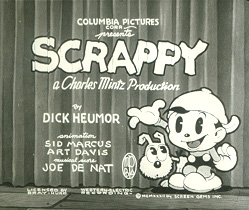 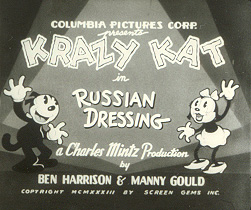 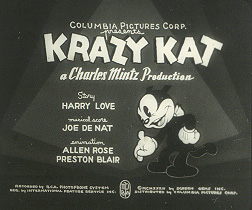 Columbia Reprint titles: Most existing prints of Columbia's color cartoons have their original titles (below left) replaced with a reissue card (see "Mr. Moocher" below), probably created in 1946 as it contains characters from later Screen Gems cartoons. Later cartoons, reissued in the 1950s have their titles and credits replaced by this second reissue card (third from left), probably created by UPA circa 1950. UPA apparently also created this "Columbia Favorite" end title (below far right), which obscures the "Proud Lady" Columbia logo on many reissues.

Columbia Original Titles: Below is an example of Columbia's color original titles during the 1940s.

1940s Black & White titles: Scrappy and Krazy Kat became "Phantasy's" and "Fables" in 1939. "Fables" ended in 1942; "Phantasy's" were the last black & white theatrical cartoons - the final B/W Phantasy release was in 1946, then the series continued in two-color Cinecolor for another year. Below are various opens as the series progressed through the 1940s.
Note: Tashlin tried a few clever openings which combined the series title into the cartoon action (see WOLF CHASES PIGS below).

Cartoon historian Cole Johnson wrote to me about these cartoons:
"I just had a look at the '40's FABLES and PHANTASY cartoons.
"Several of them I was surprised to have remembered, though I was probably about 8 when I could have possibly seen them last. Well, there's some good, some bad, some ugly in the group. Tashlin is shown to be all the more the genius he could be by direct comparison invited here, with the likes of Alec Geiss and Allen Rose. I guess the Screen Gems efforts are about the most forgotten cartoons of the classic era, not always without reason.
"They sure like to TALK in these things, or more specificly, CONVINCE. The mouse convinces the cat to eat the master's roasting chicken in KITTY GETS THE BIRD, the mouse convinces the cat to get belled in MASS MOUSE MEETING, the horse tries to convince his master to break for lunch in GIDDY YAPPING, the nazi parrot convinces the other pets to fight in CHOLLY POLLY , etc.
"Sometimes you can see they were trying for something new, fresh look, like Sommer and Hubley's OLD BLACKOUT JOE, a good one with effective UPA-like art, and good music. The Willoughby Wren's fall into this group. Sometimes it's just weird, as in the ugly FLY IN THE OINTMENT (another "convincing" cartoon). I wish they made more in the Avery-vibrations VITAMIN G-MAN, and ..SCREAMING BISHOP.
"A lot of problems can be summed up in IT HAPPENED TO CARUSO. They have taken up the Warner Bros. "Celebrity Voice" shorthand, but they really don't know what to do with it. They may have taken the Jack Benny-Rochester voices and projected them upon Crusoe and Friday-legitimate enough, but it just seems witless to then just keep up nothing but the entirely expected Benny shtick. The violin, the old car (not even a bamboo "jungle" car, just a plain old jalopy), and the fighting with Fred Allen. The last is shown via the bizarre ploy of having the cannibal king having the ersatz "Allen" voice. At this point, they quite pointlessly call attention to the whole device by telling each other their voices remind them of some certain radio stars they know!
The film also shows their other scripting weaknesses - dull dialogue, and too much of it! At the end, they seem to be getting better, good even - but then Columbia pulled the plug on them." 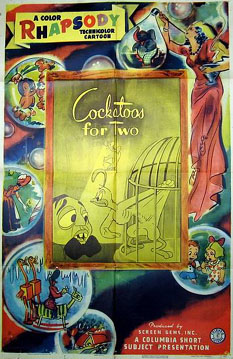 FLIPPY series: This series of four cartoons (and one appearence in a Color Rhapsody) from 1945-46 features Flippy, a yellow canary usually versus a black cat named "Flop" (his comic book name). DC Comics published "Flippety & Flop" comics based on this series. Note: Flippy's series pre-dates "Tweety & Sylvester" at Warner Bros.

PHANTASY series: Screen Gems replaced the Scrappy and Krazy Kat series with "Fables" and "Phantasies" in the 1940s. The Fables were dropped in 1942, but the Phantasies were continued until the studio closed. They were produced in black and white until it's final season (released 1947-49) when they were produced in two-color Cinecolor. Note: This cartoon features "Superkatt", created by animator Dan Gordon for GIGGLE COMICS.

KATZ-BINDER cartoons: Ray Katz and Henry Binder were Leon Schlesinger's right hand men at Warner Bros. in the 1930s and 40s. When Schlesinger sold his studio to Warner Bros. the two men accepted the top spot at Screen Gems and tried to inject some Warner Bros. spirit into the films. Bob Clampett was an uncredited story editor during this period.

HOME MOVIES and TELEVISION: The Screen Gems cartoons were distributed on 16mm as Home Movies in the 1950s (below left), and on 8mm in the 1960s (below right): 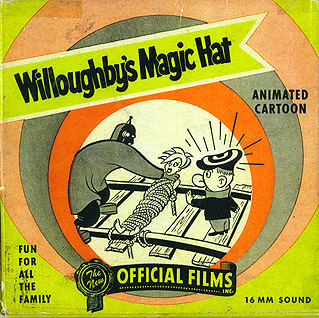 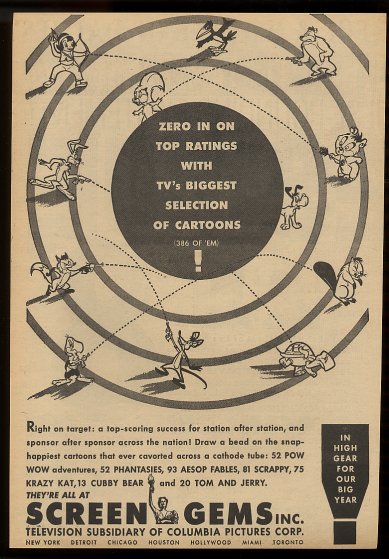 IF YOU HAVE ANY INTEREST IN BUYING COLUMBIA CARTOONS ON DVD, WRITE TO ME AT jbeck6540@aol.com.
Written, compiled and copyright © 2006 by Jerry Beck
Return to ORIGINAL TITLES home page